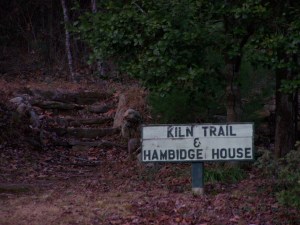 Tomorrow I leave here.  I’ve packed up most of my stuff and put it in the car, so all I have to do is throw my suitcase, my shower caddy, and my laptop in the back seat and I’m ready to roll.  I won’t hurry – I can be here as late in the day as I want, and I plan to squeeze every second of quiet I can out of the place.  Once I get home I know I’ll be back to checking email three or four times a day, and the phone calls and texts will start back up.

I’ve learned something about myself at every residency I’ve been fortunate enough to have.  At Hambidge, I’ve learned to appreciate the quiet.  To fill that quiet not with technology, but with my own thoughts.  I’ve discovered that without all that noise, I hear my own voice and my characters’ voices louder and stronger.  I’ve discovered that, contrary to what I might have believed, there is rarely an email emergency.  I can go whole days without the urgent notices about penile enhancements and 1-day-only sales at Talbots.  I can and should occasionally disconnect.

Oh, yeah, and I learned something else, too.  I’m not as brave as I thought I was.  I was warned the first day that I might run into a bear at some point (they have an overpopulation of black bears right now) and I thought it would be pretty cool.  I had this vision of meeting up with a bear on the trail and taking its picture, then shooing it off while I continued on my merry way.  But it turns out I’m a chicken shit.  One night I heard something that might or might not have been a bear in the woods outside my cabin, growling and thrashing in the creek, and I squealed.  Really, I squealed.  I’ve realized that while in theory I like the idea of communing with nature and big hairy animals, I’m a wuss.  If I’m in the woods, I don’t want to run into anything bigger or scarier than a squirrel.

So, an 8 hour drive and then I’m back in C’Ville, with lots of new writing and a new appreciation (and healthy respect) for nature.  But don’t expect an email too quickly.  I might stay disconnected for a while.  Or as long as I can stand it, anyway.

2 thoughts on “From Hambidge: Week 3”